Deployments and Cars and Murphy's Law

By Amy - December 10, 2012
I'm sure you are familiar with Murphy's Law. Anything that can do wrong, will go wrong. This is especially true for deployments and you'll hear it confirmed by any military significant other that you talk to.

I thought I would share with you the story of my car and the deployment. This is my Honda CR-V. 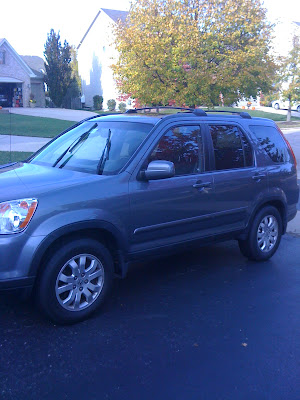 After James left for Afghanistan last December, my mom flew out to Seattle to drive back home to Illinois with me. On the way to pick her up from the airport (James had been gone only a few days), a truck kicked up a rock and hit my windshield. I ended up having to get my windshield replaced.

On our drive home to Illinois, my engine light mysteriously turned on. We stopped to check the oil. It was empty. No oil. My engine was actually burning oil so badly that we had to add a quart of oil every time we stopped for gas. And it's not like it's a super-old car, since it's a 2005.

I got it back and they had to replace a gasket. The problem came back again later and they put an entirely new engine in. Then it started shuddering and the axels had to be replaced. And then the wheels. And then the rotors. And the brakes. All in the year James was gone. Oh.. also the leather seat got torn open at the seam. It's currently being held together by duct tape.

Now thankfully, we bought a really good extended warranty when we got the car. So a lot of that was covered. Still. If you've ever experienced car problems, you can just imagine how much stress came along with each of those problems. I had to be the one to negotiate with the car guys. And they always make me nervous. I never know if they are trying to talk me into something I don't need. All while James was gone, so of course the stress was ten times more.

So the moral of the story is that anything that can go wrong, especially if it's something that your husband normally takes care of for you, will indeed go wrong.

We didn't keep James's car for the deployment, so the plan was always for him to get a car once he got home. He's kind of wanted to get a bigger car. Like a Nissan Xterra. We kind of already have mini-SUV, but I told him that he should get it anyway since he went on his deployment. When we trade in the CR-V in a few years, we can always just get a normal commuter car. So the other day, James takes me over to the Ford dealership to supposedly look at a used Xterra that he found online. While we were there, he said we should go look at the Ford Focus colors.

So we do. And I love the red one. Then he tells me we should go for a test drive, and I start to get a little suspicious. Turns out, he had already done all the research and made the decision. I have to drive further to work so he decided I should get a commuter car and he will drive the CR-V. He also told me how proud he was that I got the job. So he bought the Ford Focus for me! He even made sure they put a ribbon on top.
James gave up getting a new car so that I could have the new one. I almost started bawling. I can't even be mad about all I went through with the CR-V this year now. My husband is amazing.

We still have the CR-V so I'm hoping it doesn't give James too much more trouble. It probably won't though. Since he's home.