By Amy - February 03, 2013
I know, I've been a bad blogger lately. I just finished my first two weeks of work and I'm still getting used to working full-time again. I do hope to get back to blogging more routinely soon.

But I did want to at least tell you about my first BALL experience on Friday. :) Fortunately, the ball was about a block away from where I work. So instead of commuting home (~1 hour each way), I brought my dress, make-up, shoes, and curling iron to work with me so I could get ready right after work and go with James straight to the ball. If that sounds kind of awkward, it's because it kind of was.

I tried to pick a bathroom that wouldn't have as many people come in, so I picked this first floor bathroom in my building that is kind of hidden. Some ladies still came in and I apologized for the mist of hair spray hanging in the air. Most asked where I was going and wished me a good night, but I still felt kind of awkward.

On top of that, I had an energy drink that afternoon, which is not something I normally do, so putting on liquid eyeliner was challenging. But I did finally succeed! 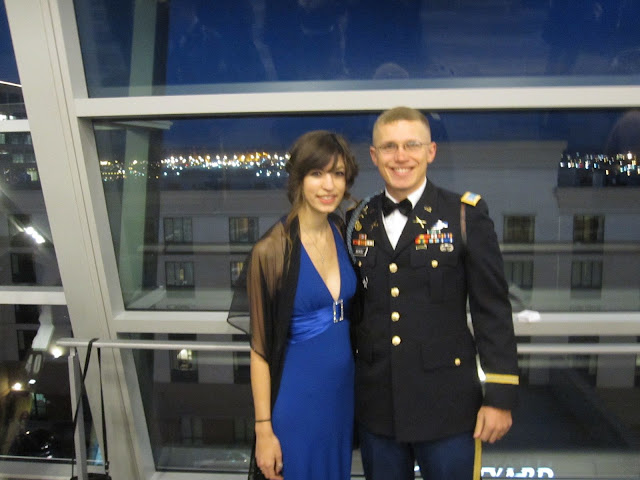 Overall, the night was pretty fun. It's always fun to get all dressed up and see your man in uniform. And also fun to see everyone else so dressed up. I still don't know a lot of people in the battalion so I can't say it was the same as going to prom or anything, but still a good night. Here are some of my take-aways:
1) It kind of reminded me of college ROTC banquets. Except with alcohol. And way more formal.
2) Except for a handful of women, pretty much every dress was to the floor. It seemed like maybe it was a few younger guys that didn't give their girlfriends/wives the memo. I seriously loved seeing all the beautiful long dresses though. 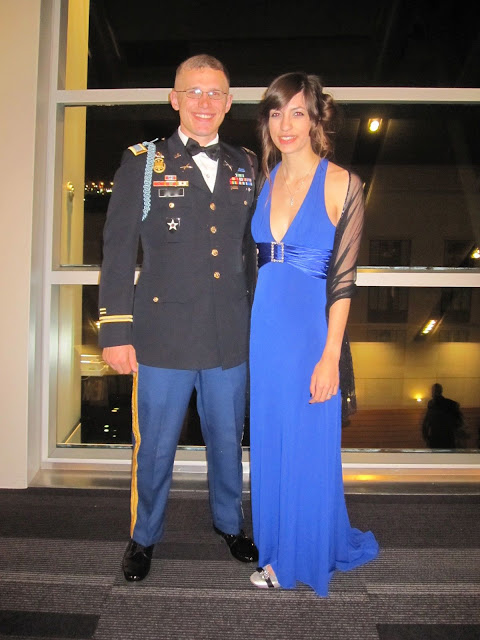 3) The humidity of Washington makes it almost impossible for curls to hold unless you use half a can of hairspray (which I did). And even then, it still might not hold.
4) Drinks were kind of expensive. They started at about $8. We both were driving home so we only had some of the one wine bottle that they put at the table.
5) We didn't have grog. Apparently, the was the first time that had happened for a lot of guys. We never had grog at the ROTC dining outs, so I didn't know whether to anticipate it or not. I have to say I'm a little disappointed, because I've never tried it before.


Each of us go to take home a whiskey glass with the battalion crest on it. They opened up the dance floor after the speaker was done and it was just line dancing for a while, so we just took off. Boring I know, but we're more of a swing-dancing couple. :)

Again, sorry I've been so bad about blogging lately. My running routine has been off too. I did run twice this week with Roxy and my goal is to get up to at least 3 times a week so I can start training for something.