How to Survive a Deployment with Grace and Dignity

By Amy - June 06, 2013
This has been a post that I've been wanting to write for a while. I don't claim that I handled the deployment perfectly. There were more than a few moments of heartache and complete meltdowns. But this is the list that I've compiled from my own experience and from talking to women much wiser than I. 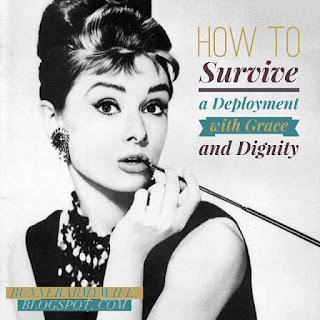 1. Don't compare. James's unit was the last one to deploy for a full 12 months (deployments this long do still happen but they aren't the "standard"). The month after he deployed, they switched to 9-month deployments. I was really bitter about that for a while. But you know what? Deployments were 18 months not so long ago. And I'm sure there were plenty of people that envied the 12-month deployments when that happened. There will always be someone whose husband has a shorter deployment. Or who gets to talk to their husband more than you do. Or one who gets more flowers in the mail than you. Wasting time on comparison will only make the time go slower.

I have a friend at work whose husband is only in town on the weekends. She timidly told me that she knows a little bit what it's like to go through long separations, but then said right away "but I know it's not exactly the same." Apparently, she had another military wife get angry at her for making the comparison. Really? Sure, it's not exactly the same. But what's she going through is hard too, and we should never downplay other people's trials because we think ours are harder.

2. Realize that someone, at least once, will say something thoughtless. I've seen more than one list that says something like "Things to never say to a military wife." It's going to happen to you. It might even come from a fellow military spouse. I even had it happen with my husband. On instant messenger, James greeted me with an "I got stabbed today" and I immediately (within exactly 1 second) fell apart. He then proceeded to tell me (probably 2 seconds later) that one of his soldiers accidentally stabbed him in the arm with a box cutter, so he needed a few stitches. It's a kinda funny story now, but I think it's a good example of how a lot of us are on an emotional tipping point during deployments.

Your loved one is at war and it's difficult for people to know exactly what to say, so they say the wrong thing. The best way to handle this is to be prepared and realize that people in most cases, are just ignorant. Picture yourself responding calmly and with grace before it actually happens.

When I wore my deployment pin while I was working at the running store, I had a handful of customers who wanted to talk with me about their opinion of the war. When it got to be too much (which only happened a couple times) I just told them, "You know, I'm really proud of my husband, but right now I'm just not in an emotional state to talk about that." Maybe for you, it will mean walking away. Maybe it will mean a quick inner prayer "Lord Jesus, help me handle this ignorant person with grace." Maybe it might mean putting that person in their place. And you know what? If you start crying, maybe they'll never say that hurtful thing to anyone else again.

3. Stand up for yourself. Maybe it means insisting that you keep your phone near you at work. Or possibly asking your family for a little space when he first gets home. If you work, take advantage of the military clause in the Family Medical Leave Act to spend some extra time with him before he leave or/and or when he gets home.

4. Remember that it's hard for his mom too. As his wife, it's going to affect you (and your kids if you have them) the most. The next person it will in most cases affect most is his mom. Her baby is at war. What she's going through is different, but very hard as well.

5. Support one another. Find at least one battle buddy that will understand what you're going through. Fellow bloggers are fantastic, but I can't tell you how much of a difference it made when I got to meet with my friend Sam for coffee in person every week or two.
Do not merely look out for your own personal interests, but also for the interests of others. Philippians 2:4

6. Pray for him. I went through the Power of a Praying Wife by Stormie Omartian multiple times. I don't know that God decided to keep James safe because I prayed, but at the very least, it helped me remember that God is in control. Even if the very worst had happened, God would have carried me through it.
Be anxious for nothing, but in everything by prayer and supplication with thanksgiving let your requests be made known to God. And the peace of God, which surpasses all comprehension, shall guard your hearts and your minds in Christ Jesus. Philippians 4:6-7

7. Find something to keep yourself going while he's gone. Don't say "your love for one another." I mean something else. For me, it was a couple things: my running goals, being a volunteer leader in my church youth group, and my faith. I talked to another wife recently that said she made a goal of reading 25 books and ended up reading over 30. Another friend of mine said that her 1-year-old daughter kept her going. I have another friend who finished her law degree during her husband's deployment. Find something else to base your identity in besides being his wife. I know that may seem strange or drastic, but it will help you to not be completely focused all the time on the fact that he's gone. Make yourself proud of your accomplishments for when you look back on this time.

She is clothed in strength and dignity, and she laughs without fear of the future.
Proverbs 31:25

Is there anything you think I missed? How did/are you handling the deployment?