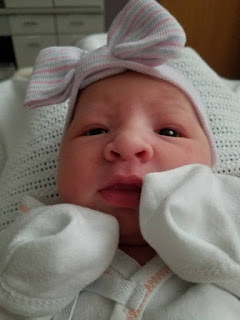 Here's Ellie's story! This pregnancy was not as easy as my first and was emotionally much harder on me. We moved when I was 8 months pregnant from Yongsan Garrison in Seoul to Camp Humphreys in Pyeongtaek. As if moving wasn't stressful enough, Camp Humphreys does not have a functioning hospital yet. So to have the baby, we had to drive back up to Seoul for my final appointments and for the delivery.

When there's terrible traffic (and there often is), it can easily take two hours to drive from where we live to Seoul. Most women will not deliver that fast, but it's still makes you feel uneasy when there's videos online of women giving birth in the car. By the way, when we decided to try getting pregnant, I thought we would still be living at Yongsan, a mile away from the hospital. I'm not even exaggerating about how close we were. I often walked there for appointments. And now we had to drive possibly two hours.

So we prayed. Almost every night, we prayed for a healthy baby and that the timing would somehow work out. And you know what? It ended up being perfect.

My mom flew into Korea on Wednesday, the 21st (I was due on the 23rd). And since Jensen was 3 days late when he came, I figured that Ellie would be late as well. Maybe not the best assumption, but I figured "hey it seems like my body takes 9 months plus 3 days to make a baby." So anyway, we picked up my mom from the airport on the 21st, drove home, had dinner, and went to bed.

Then I woke up to my water breaking at 2am.

James and I jumped out of bed, I shakily called to let the hospital know I was on my way, we gave my mom a quick tutorial of how stuff works in our Korean apartment, gave her a hug, and were out the door within the hour. Since we were the only ones on the road, we got to the hospital in just over an hour, about 4am.

Seriously though, could the timing have been any better?

Normally doctors tell you something like "labor at home until your contractions are 5 minutes apart for an hour." That's great advice if you are close to the hospital. But when you are two hours away, you should probably leave before then. But when? Seven minutes apart? Eight minutes apart? Having a clear-cut sign that it was time to go was literally a Godsend and an answer to many stress-filled prayers.

The whole ride up, I had a few contractions but not many and they were not painful. I was actually a little worried that labor would not get going on it's own. I texted my friend a little before 6am that I was there in the hospital but that things had not really started yet.

Then a few minutes later, things started and started quickly. Honestly, I don't really remember much about the timing. I went from thinking "I can handle this" to pretty much screaming for the epidural very quickly. As they were getting it ready, they told me to let them know if I felt the urge to push. I never felt the urge to push, but I remember feeling so much pressure that I purposely kept my mouth shut, because I wanted the epidural so badly. They pretty much finished the epidural (thank you, Jesus), checked me immediately after, and I was at 10 centimeters.

And by the way, this epidural was strong. When Jensen was born, I could still feel quite a bit during the pushing phase, which is how it is supposed to be so you can feel when to push. This time I could hardly feel a thing.

But I could hear her heartbeat the whole time, and it sounded wonderful. During the pushing phase with Jensen, he was in distress in the canal, so that whole part was very stressful. In contrast, the pushing phase was the easiest part of giving birth to Ellie. It lasted about 20 minutes with very little pain, I was still able to productively push, hearing that she was perfectly fine the whole time.

And then, just like that, at 9:15 in the morning a day before her due date, she was here. They were able to immediately put her on my chest, before even cutting the cord, and it was amazing.

We spent an extra day in the hospital due to possible ABO incompatibility (she ended up being perfectly fine) so hubs drove down to get my mom and Jensen to meet Ellie. Jensen was thrilled to finally meat his baby sister. And despite only being 2 and a half, he totally understood what had happened. "Baby Ellie not in your tummy anymore!" He also kept calling her "cute baby!" and couldn't get enough of her.😍
I was also really lucky that my mom got to be there to stay with Jensen and my dad and brothers flew out just a few days later. To Korea. The fact that Jensen got to stay with my mom while we were in the hospital for 2 days was a huge blessing, because I had never been away from him that long before. My mom and dad cooked meals. Everyone played with and gave Jensen extra attention while I focused on Ellie and recovered.

I had so much support. One of my best friends in Yongsan moved down at the same time. To the SAME neighborhood as us and happened to be out of the country when the baby came. So she let my parents and brothers stay in her apartment while she was away- an act of hospitality that I'm still blown away by. My other best friend in Yongsan was on call to take Jensen on our way to the hospital if I had gone into labor before my mom flew in. A woman I had just met in my neighborhood took care of our pets for us while we were all in Seoul. Ladies from the Bible study I had only attended for a few weeks brought us meals. Multiple people in both Yongsan and Humphreys were on call if we had needed anything else.

This little girl is already so loved and has no idea how lucky she is. All that love and support we have is just a testament to how amazing this military community is and how great our God is for placing us here. The circumstances were hard, but that just makes all the support that became of it more amazing.

And she'll forever get to say that she was born and spent her first year in South Korea, which is pretty cool.