By Amy - September 26, 2017
I had a very well-meaning mom tell me straight-up, very seriously, that she wished someone had told her that transitioning from one to two kids was harder than the transition from zero to one kids. I'm still not really sure if this was a helpful comment or not. I think it made me unnecessarily scared and gave me a lot of anxiety about our move right before. But on the other hand, it was very hard. I felt like I was drowning, to be honest. At least for the first few weeks, after my parents went back home and James went back to work. 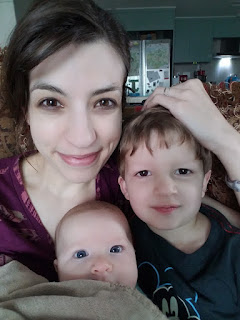 But I am happy to say that for about the past 3 weeks or so, I've not only felt like I'm not drowning, but I've got things under control and I'm able to actually enjoy this time with my children at home, as a stay-at-home mom, in another country away from family. By the way, did I mention that my husband is in company command right now? *Cue big sigh.* So it's a far cry from a deployment, but he has been getting home later and later lately. Despite that, here's what I can honestly say:
Those last two bullets are so important. If I decide to catch up on chores instead of taking some time to journal, reflect, spend time with Jesus, then things start to go downhill quickly. I've seen a lot of mom-blog insist on getting up before your kids do. I would agree with that too if they don't nap- I can get away with getting up when they do because I get this time later. It's so so important.

So all-in-all, how am I doing this with a two-year-old and a three-month-old? Honestly, a lot of prayer. But this is the second time I've followed this book, On Becoming Babywise, and it's worked like a dream. It took a little longer with Ellie than it did with Jensen to get her on a (somewhat flexible) schedule and sleeping through the night. I blame this on my toddler taking a lot of my attention and I also think Ellie is just a little more high-needs than Jensen was. But we got there. And it's awesome.

If you are constantly on-to-go and don't spend a lot of time at home, this method would be pretty difficult to put into practice. However, I feel like this book otherwise is this forgotten little secret and I wish I could tell all my newborn mom-friends about it. I don't know how I could have survived any other way.


Unfortunately, I had to buy this book again because we most of our books in storage when we moved to Korea. So I purchased it on my Kindle so I could use all the schedules again. That's okay. It was totally worth it.

Again, that time to myself and with my hubs in the evening are really the most important things. This book really just helped us make it happen.