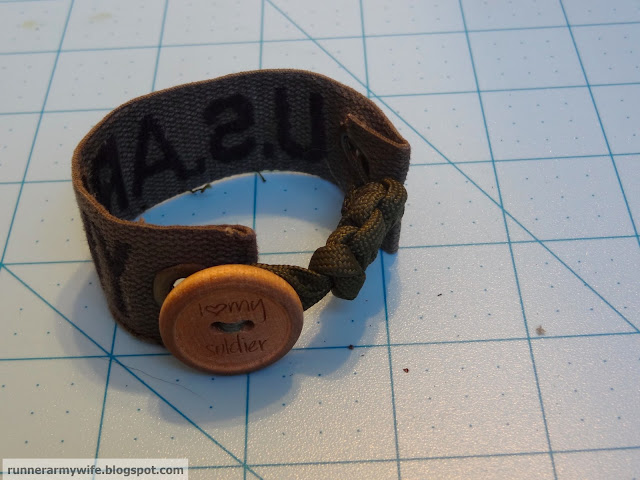 I've had a lot of people ask me about it, so I thought maybe it would be cool to show how I did it. Yeah, it's a little cheesy. That's okay with me. Maybe when I'm living near base and I'm a more sophisticated Army wife, I won't wear such things. Maybe. But for now, I'm living in an area with hardly any other MilSOs (I've looked) and I'm proud to wear this.

This one that I'm showing for the tutorial says "U.S. Army." The one I wear actually does say his/our last name. I think it's a bit more affectionate that way. But since I'm trying to remain a bit anonymous here, I made a U.S. Army one especially for this tutorial. And I think this one is pretty cool too. 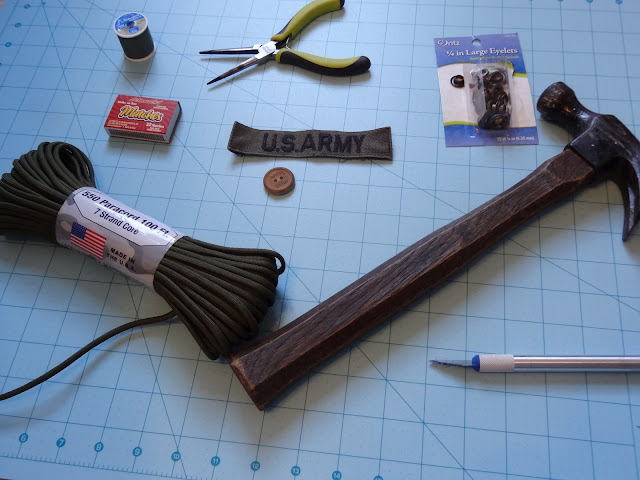 
So start with your nametape. 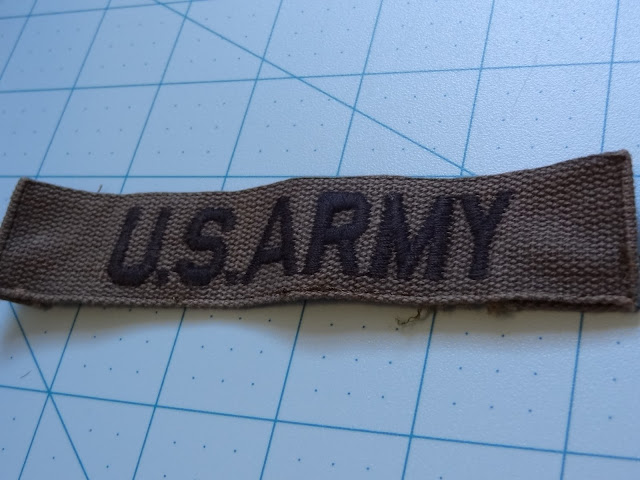 I got my nametape off of some old uniforms that my husband's family were using for paintballing. I have no idea how old this is, but I kind of like that it looks a little worn. So since I just seam-ripped it off a uniform, it was already nicely ready for a bracelet with the folds on the side. You may have to iron it so it looks like this: 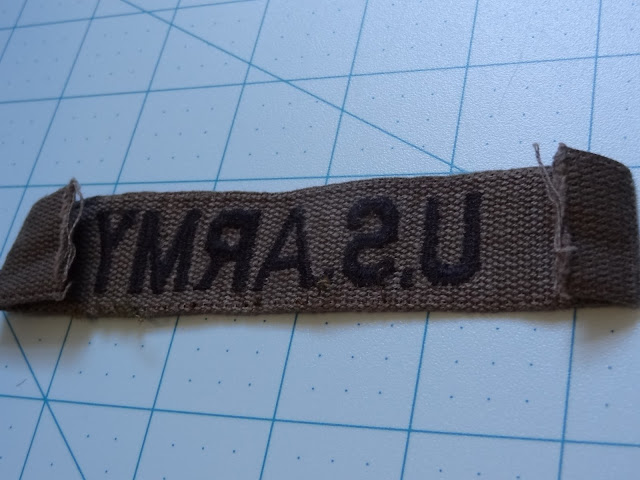 If you want to put a couple stitches in it so it stays, that wouldn't hurt. I didn't on mine. The eyelets will do a pretty good job holding the folds in place. 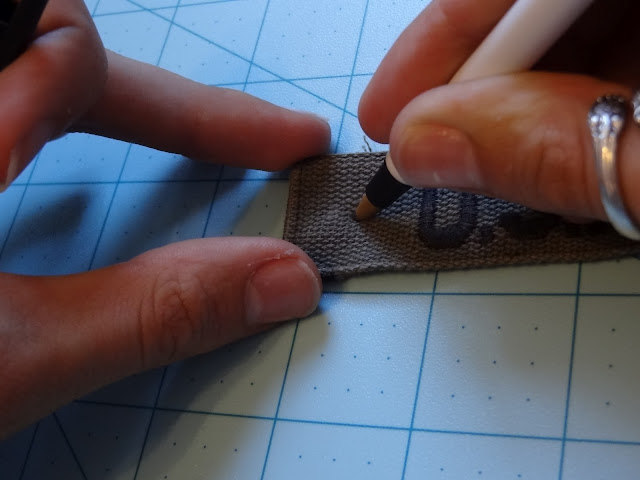 Next, make a mark where you are going to place the eyelet. Then, very carefully, start to make a hole with the Exacto knife. 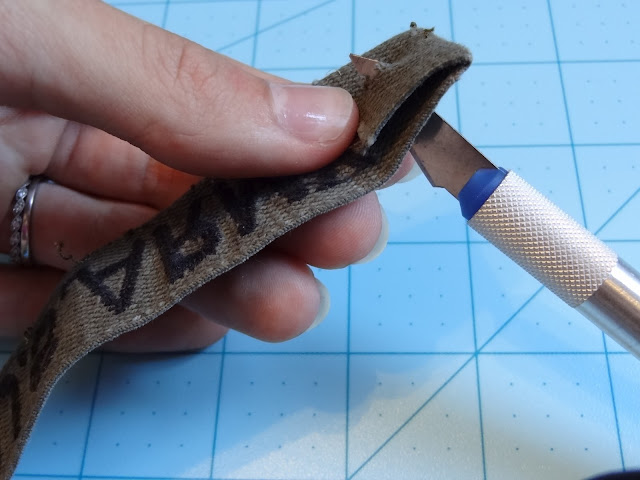 Seriously. Be careful.
Making the hole for the eyelet is the most annoying part. I also use a pen to round off the hole and make sure the eyelet would fit. 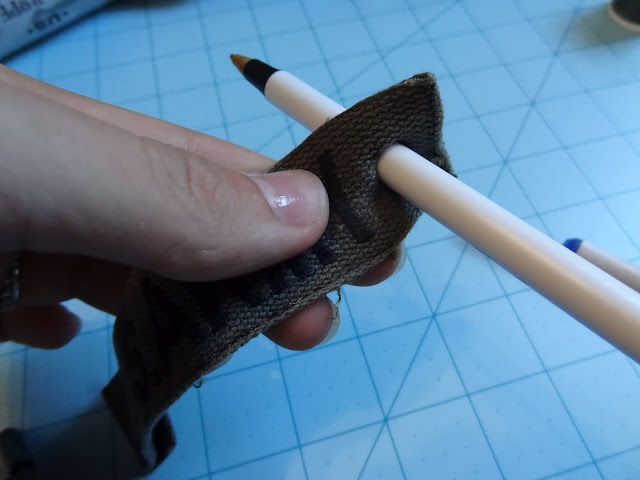 There is a more correct way to place an eyelet. I kind of just used the pliers and a hammer because I don't own an eyelet tool. Here is a good tutorial on how to do it correctly.

Next, use the tread to tie the button to the eyelet. It might go faster to loop it around a bunch if you use a needle. I used about 2 feet of thread so it was looped around a lot. Yes, you could just stitch the button directly to the nametape. That works fine too. I liked the symmetry of having two eyelets so that's why I did it this way. I also stitched it into the nametape a couple times toward the end to secure it.
Next, measure a loop of paracord to finish off the bracelet. It's going to be different for everyone, depending on the length of your nametape and your wrist size. I used about 4 inches here. 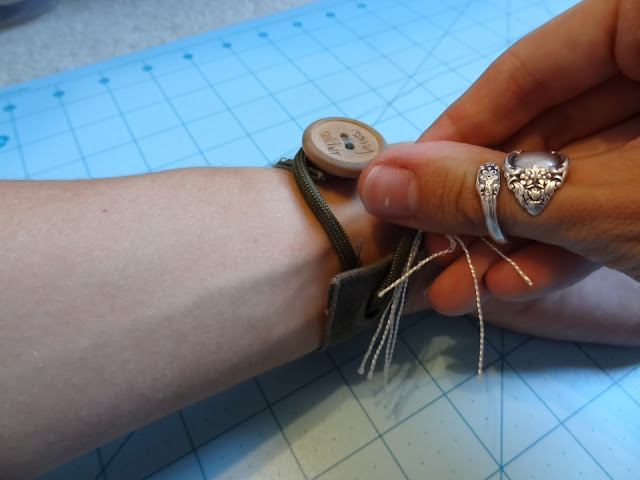 Remove the insides of the paracord. This is optional. It makes the bracelet here a little less-fat. 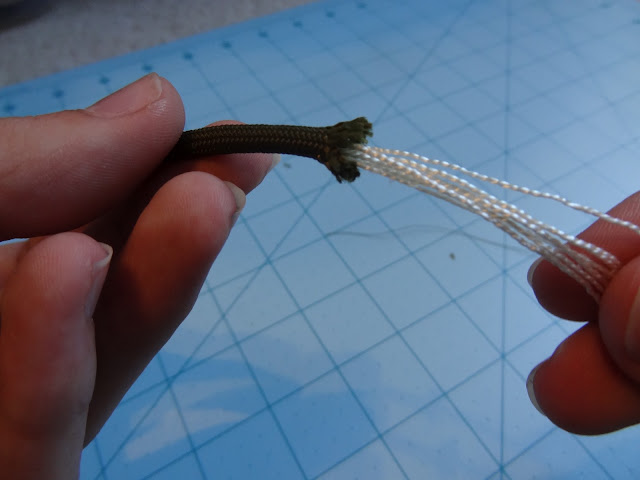 Hold the ends of the paracord together with the pliers. If you can, twist one end and stick it slightly inside the other end (remember it's hollow) and burn the ends together. Make sure you have it looped through the eyelet of the bracelet as shown. The idea here is to make a loop without knots. It's hard to hold the ends together with pliers and strike a match so you may either want to hire a friend to help, or you may have better luck with a lighter.

Measure one more time to make sure it fits your wrist and goes around the button. Then move your burned part down as shown below. It's going to get covered up. 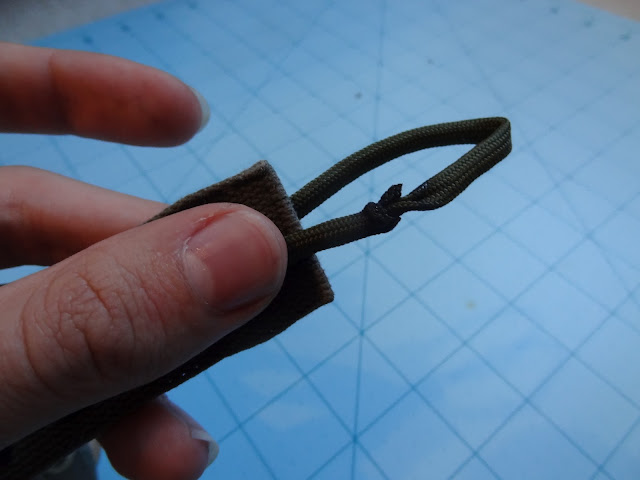 Start your square knot. If you are unfamiliar with paracord bracelet/macrame knots, there is a really good tutorial here. Make sure the loop on top has enough room to go around the button. 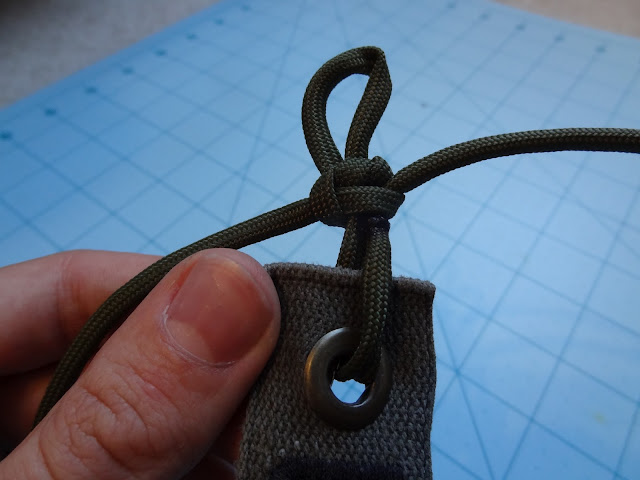 Now, depending again on how long the nametape is, you might now have very much room here. I had a little more room on my actual nametape because our last name is shorter than "U.S. Army."
So I couldn't tell you exactly how much paracord you would need here, but I think it's safe to say you'll definitely need less than 2 feet for this part. Next, cut off the ends.
Hold the ends together with pliers on the back of the bracelet. Then, while holding it with the pliers, burn those two ends together.
You could stitch this part too. I kind of like playing with matches and burning things, so I did it this way. Just be really careful.

And that's it! You're done! 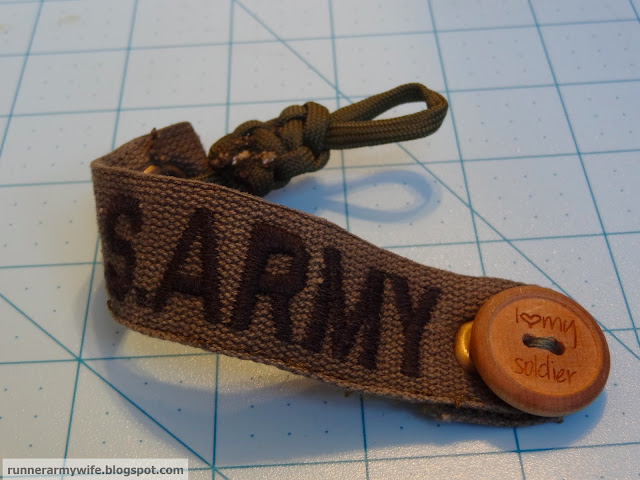 And now you have a cute paracord nametape bracelet. 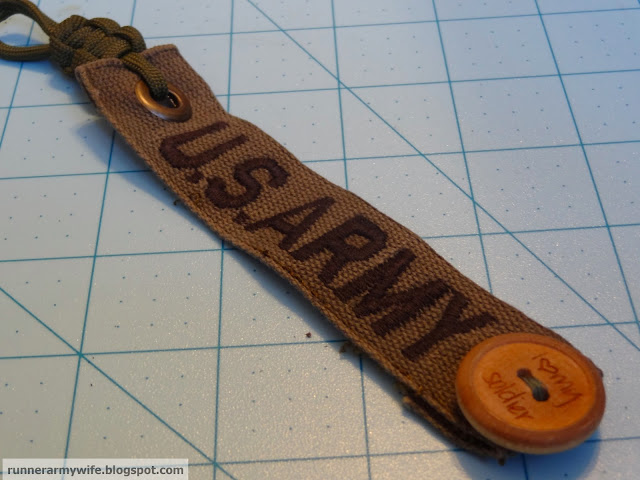 I'm going to help my friend Sam make a Navy one. She ordered a button that says "I love my sailor" from the Cupid's Cottage Etsy shop. Since the Navy nametapes are blue, I think it would be super cute with blue paracord. Have fun!

PS: Let me know if I wasn't clear about something. This is only like my second tutorial ever.
DIY