By Amy - October 04, 2012
Oh, golly it's coming fast. It's hard to believe that I signed up for this race 8 months ago. Holy cow. I just got my confirmation ticket/packet in the mail the other day. It's a 36-page participation guide booklet. I'm a little overwhelmed to say the least. Soo much information. 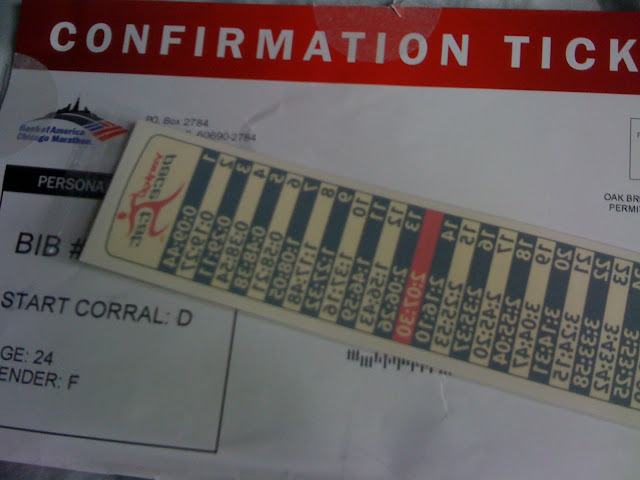 My pace tattoo also came. For 4:15. Ah I don't even know if 4:15 is realistic for me. I'm still going by Jeff Galloway's Magic Mile calculator.

Also, I met my goal for my Team Salute fundraising. Yay! Actually I went over. I have some awesome friends and family. Here's the only problem.. I'm not really a fan of the Team Salute singlet. 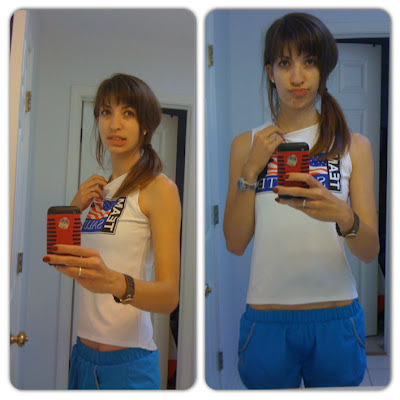 So.. in Brooks and Nike stuff, I'm pretty much always a small. This is actually a medium. It's too short, and the neck holes and arm holes are too small. Plus, I kind of wanted to wear a bright color so that my family could pick me out easier in the crowd. Since I hit $500 in my fundraising, I'm supposed to get a Team Salute running hat. I'm hoping that me just wearing the hat will be a nice compromise. I looked on the site and noticed that EVERY single person in the marathon last year wore their shirt, at least in the picture. I'm hoping that I can either exchange for a different size or just be a rebel and only wear the hat. Or only wear the shirt for the picture.

Overall, I'm pretty nervous. Of course, I had to pick the second largest marathon in the world (The New York Marathon is the only one that has more people in it). I think the sheer hugeness of the race is pretty intimidating. But also very exciting. I've always wanted Chicago to be my first.

The weather is supposed to be awesome.

A low of 37 degrees the night before and a high of 53. That's actually a lot cooler than I was anticipating too. I might even wear arm warmers for the first part of the race. My mom has an old pair of sweat pants that she said I could wear and then leave at the start (local charities come by to collect clothes that people abandon at the start), so that's my plan for keeping my legs warm.

So anyway.. I basically get butterflies whenever I think about it. I'm super-excited and kind of scared to death at the same time. I know I've done everything I could do to prepare for it, but I'm still nervous that I'll have a bad day after all the preparation that I put in. I honestly don't remember the last time I was this nervous before a race. My first half marathon? My first college race? I have no idea. But it's definitely up there.

*deep breath* Okay, how to you prepare and calm yourself for big events like this? Any tips?
Chicago marathon races