By Amy - January 16, 2012
Alright. Starting to get back into gear. Recently celebrated 6 weeks down of this deployment (thank God!). Still don't know about whether the deployment will be shortened or not. So I can't make plans yet about Chicago Marathon.

However, I did sign up for my first half marathon of the year!

Woot. So April 1st will be my first half of 2012. One of my 2012 goals is to finish 6 half marathons, so this is a start. It's actually the first race of the Chicago Half Marathon Series. If you do 4 out of 6 half marathons, you are automatically entered and you can get points by how you place in your age group. Sounds awesome, right? 'Cept they haven't updated their website for 2012 yet. So I don't actually know if it's happening. I'm all about it, if it is though.

I started this half marathon training plan. I've also been going to my local YMCA for pilates and yoga. It's been a humbling experience. Sure I can run, but I have no upper body strength or flexibility whatsoever. Here's hoping these classes get easier.

I've also been running with my dog, Moka. I've got her on a couch-to-5k plan. She's a little chubby right now, but I've got her up to 1.5 miles of running without stopping. She flops over on her back panting like this when we get home. She's loving it though. She gets super excited whenever I get that leash out. 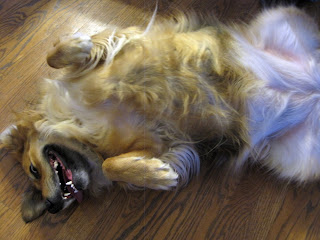 I've also been in contact with James pretty much every day. He is working in an office right now with a computer with Internet. This is actually totally contrary to what we were told about communication before he left. The exact words I remember were "little to no internet connectivity." However, he is still waiting on getting his own platoon. He is currently one of the newer officers, but the most qualified (only one with a Ranger tab). So we're not sure what that means about who gets the next available platoon. He really wants one, but he probably won't have this nice setup with internet once he get it.

So.. I'm savoring the frequent communication and the safety inside the base that he's enjoying right now. I'm not sure how long it will last.
Chicago communication deployment half-marathon races training plan