By Amy - March 06, 2012
I've been an Asics girl for almost as long as I've been a runner. Seriously. Long time. I tried another brand once and had bad results. I switched back to Asics and the problem went away. I've been a very loyal Asics customer ever since. Seriously. You find what works and stick with it.

I got these sweet looking Minimus shoes to wear in the store when I'm working. But I'm not ready to make the jump to minimalist running yet. So I decided to bring in my Asics and have my manager look at them and (hopefully) recommend the New Balance equivalent.

By the way, I'm what you call an "overpronator." I've known this for a while, but since I started working at New Balance, I'm told that the easiest way to tell if someone overpronates is to look at their achilles. See how mine curve out? Yep. Overpronation. So I have to have some stability in my shoes.
These are my two most recent pairs of Asics shoes. The GT-2100 series. Both have some miles left on them. I've been running in both. 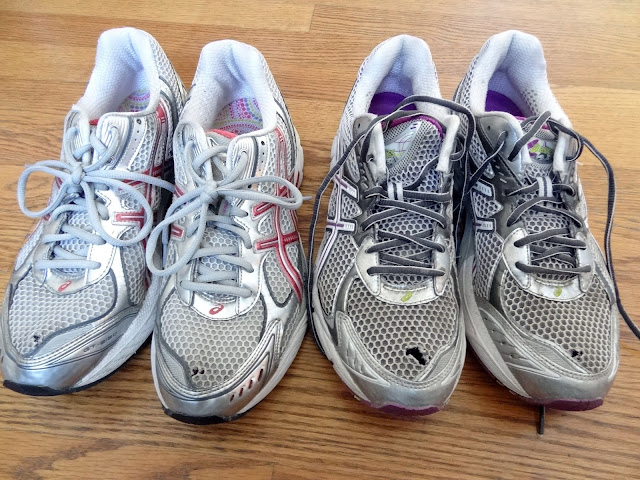 Notice anything? Yep, the mesh has holes. On both sides. This has actually been happening for a while now. I know it was sometime in college, so at least for 3 or 4 years. Yep. Every shoe I've had for the last 3 or 4 years (or longer) has had these holes after about 50 miles. But besides the fact that there are holes in my shoes, they've been great.

So I bring my shoes in to the store. My manager asks me to put them on and feels where my toe is. "These shoes are too small. You need to go up at least another full size."

What?? He told me that the pressure on the front of the shoe is what is putting the hole there. I've always been a size 10. When my foot got bigger, I'm not sure. Maybe sometime in college? Probably right around the time the mesh started tearing.

So I brought home a pair of size 11 New Balance shoes. 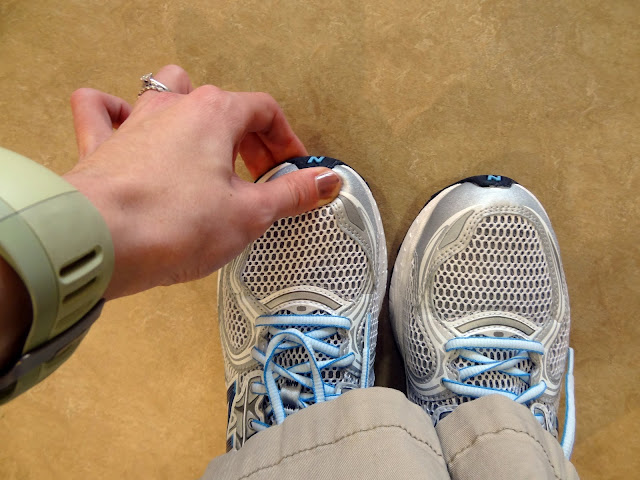 They have this much room in the front. About a finger's width is what you want, apparently. My manager assured me that I could return them if I didn't like them. I ran in them today and was conscience of them the whole 5 miles. It's the slowest run I've done in a while. It's probably all in my head, but they felt a lot heavier. How much weight does another size add on? And how much is that going to slow me down? These are worries going through my head as I run.

Part of me just wants to switch back to my size 10 Asics and just tell my manager that I'll tape an "N" to my shoes for the New Balance running club. They haven't caused me any problems right? The thing that worried me is that they might start causing problems when I start full marathon training (in the beyond-13-miles zone).

Sigh. It's really frustrating to be told you've been doing something wrong for years. And even more so when the "right" way doesn't feel right. Maybe I need to switch to a size 11 Asics first and just change one thing at a time.

Edit: I've updated my opinion about this.
running shoes